The label to this post should probably be something more like "Stuff I've been meaning to do for a while and finally got around to doing it," but that would be almost every post in this blog, except maybe some of the recipes (but you could argue that I've been meaning to post that recipe for a while and finally got around to posting it, so nothing's immune!) so I won't do that.
We got this toddler mattress several years ago, and them some family members found a second hand frame and gave it to us.  When we put it together, we didn't have the right size bolts, so we just used what we had an warned our kids to be careful.  We kept MEANING to get bigger bolts and replace the current ones, but it was very low on our priority list, so naturally, it didn't get done.  When we moved we took the bed apart and said that we would only put it together with the right sized bolts!  As you can imagine, it therefore sat in the kids room, leaned up against the wall, with a mattress on the floor as our two year old's bed for several months.  Well I finally decided to go get those bolts!  I measured the diameter of the holes and then got the closest match at the store that I could find, they were too big, so I had to take them back and exchange them and I FINALLY got the bed put together! 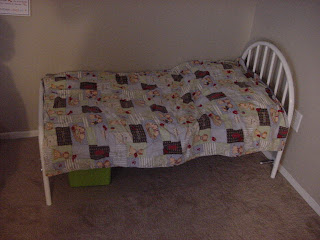 Look!  It looks like a real bed!  We're slightly less ghetto in one area of our lives!  But the best part? 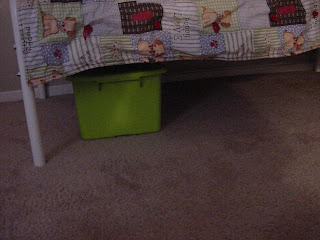 Storage space UNDER the bed!  That's our Lego box, and it fits under there so perfectly!  I will most likely put more Bins of various things under there as need be, but for now the space is available!
Yea for overcoming procrastination in at least one thing!
Posted by Marilyn at 1:05 PM

Marilyn
I am a homemaker who is still learning all that that involves. This is my journey to learn to be better at making a dwelling a "home" and hopefully help others who are trying to do the same.