At heart, I am in many ways a minimalist.  maybe not as extreme as many people are, but I do like and uncluttered house, very few decorations (only ones I love, and most of which are wall mounted family pictures), but lately I have felt like I very much have fallen behind.  And it's true, the more I evaluate myself, the more I see my laziness has crept in and I'm having a hard time purging all those extra papers and my one year old likes to scatter everything he can find all over the house, and it gets very overwhelming.  So the past few days I've been working on doing a little more picking up and purging, but it only goes so far.  So I started researching minimalism with a large family.  I found a lot more that I expected!  Most forums recommend a certain number of things per child, which makes sense, there's a lot about how few things you need for a baby, which I think we did a pretty decent job with our third, especially since he was the fifth person in our 600 square foot apartment, so we had to keep baby stuff to a minimum (pack and play, bassinet, car seat, blankets, sleepers, onesies, diapers and wipes, that's about it), and there's also a lot of advice to do things like get out and enjoy nature, something I love to do, and wish I still lived o close to a myriad of hiking trails, but we go for walks and whenever we visit family we spend some time walking around the country side.  My hubby and I really want to move to the country so our kids can experience being outdoors a lot without being so near to so much pollution, just like we had when we were kids.
I think the best thing I found was from zen family habits.  The author of this blog has 6 kids, so I give him some credibility on this issue.  One thing he says is:

"Minimalism is counter-productive if you become obsessive, and become a clutter-Nazi. We become minimalist so we can remove the extraneous, and focus only on the important. The kids are what’s important — not the lack of clutter, or having the simplest lifestyle. Always remember that. And then, breathe. Relax. Let go of your frustrations, your expectations, your desires for perfection, and instead adopt a minimalist attitude: of going with the flow, of living in the moment, of enjoying your kids and experiences rather than things. Being a parent can be frustrating, if you let it, or it can be fun, if you learn patience and adopt this relaxed attitude."
source

He wrote that for me, I swear he did! When I had one child I personally think I was great at going with the flow and enjoying her.  Then again, the house always seemed to be in total disarray!  It's amazing how much balance is needed in life!  After I read that I put the computer down and watched my one year old walk around the house with his tongue sticking out as he bounced and made little grunting singing sounds.  Then I noticed my three year old throwing ANOTHER fit over nothing and I was starting to get annoyed when I suddenly realized that I needed to go to my fix all method: I asked him "Do you need a hug?"  He's feisty so often he'll say no or just scowl at me when i ask him, but this time he just nodded with a big sad frown on his face and climbed into my lap and I just held him while he told me how upset he was that his sister was playing with a toy when he walked into the room and decided he wanted to play with it.  I just rubbed his back and told him it was okay.  Life's so hard when you're three.  I try to do this whenever I notice a meltdown, but it's so easy to get caught up in how big a deal they're making over nothing, or how they ruined something or made another huge mess (happens a lot around here).  We need to relax and be at peace or else it won't matter how much stuff we have or don't have, or how clean out house is or isn't, or anything else, and our kids won't be as happy if they're reading our negativity (stop sending out bad vibes, man!) 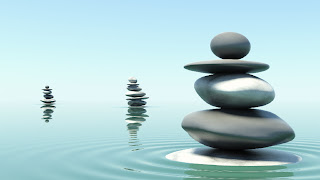 Basically, minimalize, but also relax and go with the flow!
Posted by Marilyn at 4:51 PM

Marilyn
I am a homemaker who is still learning all that that involves. This is my journey to learn to be better at making a dwelling a "home" and hopefully help others who are trying to do the same.